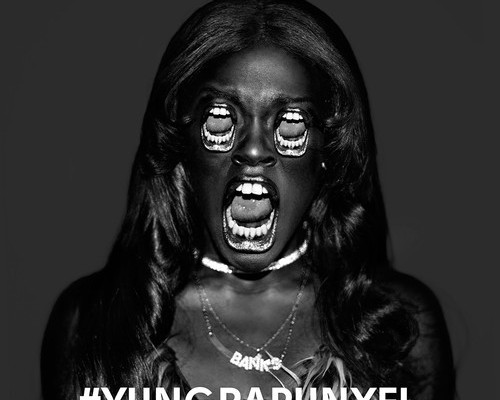 MS. BANKS! Oh my god, this was suppose to be her single for the upcoming, most anticipated album  “Broke With Expensive Taste” which #YungRapunxel originally was going to be dropped on Itunes later this month March 26th; that she announced on GerogeFM in Australia.

#YungRapunxel , #YungRapunxel, #YungRapunxel dropped yesterday morning, Monday morning.  A Monday morning, the start of the work, of classes basically back to reality and early as shit and  Banks drops this fiery track on soundcloud.  The album art, track art alone is enough for you to want to take a little peek, a little snap-snap, a little listen. But honestly, soon as the song starts, the bass hits and then she comes in with this “i wanna be free,  i wanna be free” all I could think was “fuck yeah”. Ms. Azealia stated  that “#YungRapunxel is the dark, twisted, sister version to 212.” and couldn’t agree more. There just isn’t anything like it. Seriously, there isn’t.  It’s hard and abrupt, it’s “different”and it delivers. I mean seriously “let me pop my shit”.

check out the lyrics here