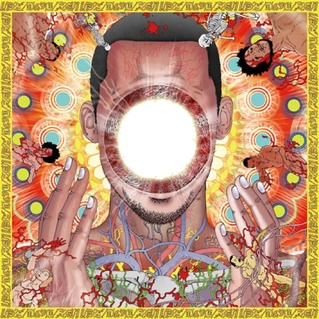 Young Fathers is hand downs freaking phenomenal. Dead – shit, their group is filled with so much zany energy it’s absolutely magical and inspiring. I’m so fortune to go to back and see Baths (again) another artist on the list, who actually had these guys open for him.  They are totally out of this world, this mixture of rap, hip hop, r&b, reggae and punk.  They’re utterly groundbreaking, soul rushing tunes.

Slow Magic is exactly what the way to describe him. It’s like his music slowly creeps up and then you get that out of body, cosmic experience. How To Run Away is seamless sewn together with fluctuation between beats and rhythm, everything is so fluid. He is also fucking outstanding live. I seen him at the Blind Pig in Ann Arbor last year  for my second time, and it was just as good as the first time.

Yo, I LOVED THE HELL OUT OF THIS ALBUM. I’m seriously not kidding, these young girls were out here for him. I swear it was the soundtrack to the summer. He’s so sexy, so fine, and every time I hear –  I Won or I Be U ,  I seriously imagine him talking to me. Then we have Honest which was every ones motto, anthem.

Look – Robyn is just that girl. I freaking love how she’s always bring something new and funky to the table. I feel like she is  the ultimate cool girl. I mean she is 35 and been in this game for a minute and she continues to shock us and continue to be that girl! Robyn, you are the real M.V.P.

*Favorite Tracks: Say It,  Monument,  Inside The Idle Hour Club

Schooboy Q is everyone’s man right now. He was another one that everyone and myself was rocking to. The whole TDE team was on point this year. I seen him live at Saint Andrews here in Detroit and he was spitting that shit, he had the whole place rocking. I feel like this perfect track for those hood girl nights in the D.  Hey, Q  wanna be my baby daddy?

*Favorite Tracks – Studio, Man Of The Year,  Collard Greens,  Presciption/Oxymoron, His and Her Fiend.

BATHS, BATHS, BATHS. YOU HAVE TO KNOW BY NOW THAT I’M IN LOVE WITH HIM. THERE YOU HAVE IT.

* Favorite Tracks : EVERYTHING – THE WHOLE ALBUM

Sza – the girls voice just melts my soul. I love the passion you can hear in her work, it’s alluring, seductive. Z is this chilled out R&B/Hip Hop album that just ignites your taste buds.  I just adore her and clawing at the chance to see her live.

Tycho -Awake is a simple masterpiece just those uplifting vibes, chill session you need.  You can’t go into 2015 without listening to this album. #electroicdreampop #daydreamtransecend  Listen and reflect on yourself and what you want to accomplish in 2015.  Also I seen him live as well this year at The Crofoot in Pontiac and he was excellent. It was a #soulquest

Future Island is pretty fucking awesome if you ask me. Samuel T. Herring  has this amazing voice but I don’t why I always think of like Transylvania when i hear him even though they’re from Balitmore. Words can’t do future island justice but this performance on David Letterman can

wasn’t that just freaking out of this world!? I need to see them live, I’m a fiend.

Favorite Tracks: Seasons, Back In The Tall Grass, A Dream of You and Me, A Song For Our Grandfathers

Flying FUCKING Lotus this was a treat for the soul. I’m so happy that I got see him live this year at Royal Oak Music Theater which was a treat. His shit is unreal, the set up was unimaginable. You’re Dead is exactly right, musical heaven. The beats throughout this whole album are on point and you can’t help but move. It’s hip hop, it’s jazzy,  it’s chaotic  but most of all it’s comic.

ZZ BANKS – it’s finally here and i’m fucking obsessed. I know my girl has been through the ringer the queen still comes out victorious. Broke With Expensive Taste is totally in it’s own lane. Ms. Banks has this whole rappy girl house flare just bouncing all over this album and then she gives us the Harlem 90’s vibes. Her talent is out this world and these lyrics are straight fucking fire. I love here for being over opinionated and making music especially for me. If i could make music, this would be .

This is me, I am Azealia Banks, I live through her and her black girl craft.

Another band I had the opportunity of seeing live which was pretty magnificent.  Lost In  A Dream is that album you turn on after a longs day of work and poor yourself a nice Makers and Coke and don’t forget the lime and sit and think about your life. This album just touched my soul and just resonated with me from beginning to end. It’s a fabulous piece of work, absolutely beautiful.

* Favorite Tracks – Red Eyes, Lost In The Dream, Under Pressure, Suffering, In Reverse

TWIGS – what to say, what to say. She is the breath of fresh air we needed. I mean come on, I know I’m not alone when saying when I heard two weeks I listened to three days on repeat, all day, the only thing I would listen to. Seriously- I got goosebumps and chills when I heard her voice and it didn’t stop there, they remained through the whole album. It’s so light and so lovely. She’s absolutely breathtaking, stunning and original.  I’m totally infatuated her, memorized by her.

Yo, Minaj – The Queen of Rap did her thing on this one. She came out to win again and showing everyone how diverse she is within these 19 tracks. I love that she keeps that hood girl appeal with “Win Again” (#MYABSOLUTEFAV) but then softens it up “Bed Of Lies” and “Grand Piano”. Then to top it off, the icing on the cake she gave us MORE NICKI AND B – “Feeling Myself” and then took it back to Pink Friday Reloaded – “Up In Flames” – bitches ain’t got punchlines or flow – when she came in with that I was threw…. #dead #killedthegame #therealmvp

SERIOUSLY, WHO THE FUCK ELSE WOULD IT BE? BOW DOWN BITCHES